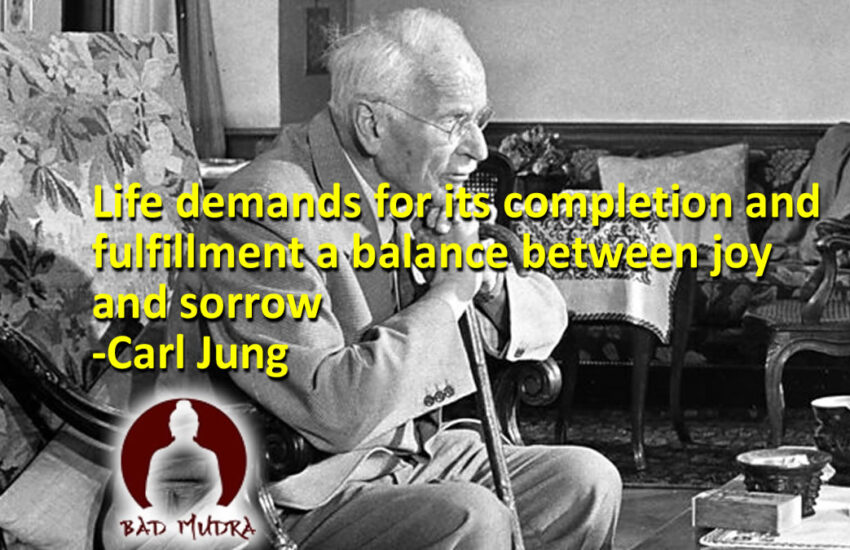 The following passage is taken from Carl Jun’s Practice of Psychotherapy Vol 16. For those who are well-read in the area of mindfulness, this text will resonate.

Instinct is not an isolated thing, nor can it be isolated in practice. It
always brings in its train archetypal contents of a spiritual nature, which
are at once its foundation and its limitation. In other words, an instinct is
always and inevitably coupled with something like a philosophy of life,
however archaic, unclear, and hazy this may be. Instinct stimulates
thought, and if a man does not think of his own free will, then you get
compulsive thinking, for the two poles of the psyche, the physiological and
the mental, are indissolubly connected. For this reason instinct cannot be
freed without freeing the mind, just as mind divorced from instinct is
condemned to futility. Not that the tie between mind and instinct is
necessarily a harmonious one. On the contrary it is full of conflict and
means suffering. Therefore the principal aim of psychotherapy is not to
transport the patient to an impossible state of happiness, but to help him
acquire steadfastness and philosophic patience in face of suffering. Life
demands for its completion and fulfilment a balance between joy and
sorrow. But because suffering is positively disagreeable, people naturally
prefer not to ponder how much fear and sorrow fall to the lot of man. So
they speak soothingly about progress and the greatest possible happiness,
forgetting that happiness is itself poisoned if the measure of suffering has
not been fulfilled. Behind a neurosis there is so often concealed all the
natural and necessary suffering the patient has been unwilling to bear. We
can see this most clearly from hysterical pains, which are relieved in the
course of treatment by the corresponding psychic suffering which the
patient sought to avoid.

The Christian doctrine of original sin on the one hand, and of the
meaning and value of suffering on the other, is therefore of profound
therapeutic significance and is undoubtedly far better suited to Western
man than Islamic fatalism. Similarly the belief in immortality gives life
that untroubled flow into the future so necessary if stoppages and
regressions are to be avoided. Although we like to use the word “doctrine”
for these—psychologically speaking—extremely important ideas, it would
be a great mistake to think that they are just arbitrary intellectual theories.
Psychologically regarded, they are emotional experiences whose nature
cannot be discussed. If I may permit myself a banal comparison, when I
feel well and content nobody can prove to me that I am not. Logical
arguments simply bounce off the facts felt and experienced. Original sin,
the meaning of suffering, and immortality are emotional facts of this kind.
But to experience them is a charisma which no human art can compel.
Only unreserved surrender can hope to reach such a goal.

Not everybody is capable of this surrender. There is no “ought” or
“must” about it, for the very act of exerting the will inevitably places such
an emphasis on my will to surrender that the exact opposite of surrender
results. The Titans could not take Olympus by storm, and still less may a
Christian take Heaven. The most healing, and psychologically the most
necessary, experiences are a “treasure hard to attain,” and its acquisition
demands something out of the common from the common man.